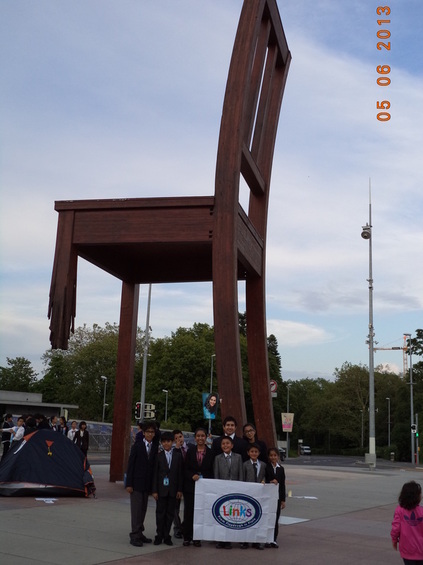 This year students from LINKS had visited Geneva to attend MMUN. The students that had attended MMUN  included Shane Mana, Kayan Sayeed, Kaiya Sayeed, Mustafa Faisal, Abdullah Kalat, Zarah Chawla, Ayla Adnan, Aryaan Sadiq and myself. The conference was for five days and each of us had our own topic. There were groups of two but as there were not enough delegates from LINKS, not everyone was in a group. After the conference had ended there was a Social Night and a Closing Ceremony for delegates from all over the world including us. The parents that had come with us were Miss Yasmeen Sayeed (as a Faculty Adviser), Benaifer Kakalia (as the Ambassador of the MMUN) and Miss Ishrat Siddiqui (as the Ambassador of the MUN).  It was a fabulous learning experience for us. here to edit. 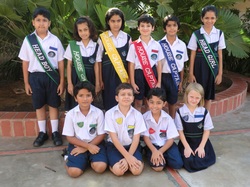 One of the biggest mysteries at LPS at the beginning of the academic year is the selection of the student council. The student council consists of one head boy and head girl, four house captains representing each house along with four vice captains.

Every year students who are nominated work hard towards their election campaign.  Students anxiously wait for the names of the two lucky students who will be awarded head boy and head girl. The names of the student council were announced by Miss Nargese Dastur in the assembly.

Reaching the final decision and selecting the finalists must have been quite a task as the nominees were all very capable. The nominations are suggested by the teachers which are then finalized by the management.

Captain and Vice Captain for the Red Dragons- Hassan Puri and Aurangzeb Shah.

Captain and Vice Captain for the Blue Sharks- Raahim Mansoob and Elizaveta Baronova.

Captain and Vice Captain for the Yellow Vipers Irij Zuberi and Saad Sattar.

Captain and Vice Captain for the Green Gators- Maria Zeeshan and Hamza Minhaj. 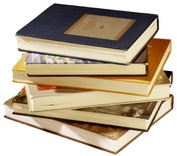 Read For A Cause.
By Mishaal Khan, Class 11.

Read For A Cause is an annual event at Links that serves a number of purposes. Firstly, it encourages students to read and instills in them a love for books. Secondly, it is a method of collecting funds that are spent in a fulfilling manner, such as perhaps making donations to orphanages, or to NGOs that work towards helping underprivileged children.   This year, we are looking forward to collecting an impressive amount that helps add more books to the Libraries at LPS and UPS!

It is of utmost importance for every child to find a suitable book, pick it up and get lost in the fictitious world of imagination. There is a massive number of different stories out there and it is our duty to find books that are of interest to us.

A person's love for a book should never diminish. As said in the words of Ernest Hemingway, "There is no friend as loyal as a book."

There is beauty in the art of reading. Not only is it a wonderful past-time, it is also absolutely necessary in shaping a person's character and is pivotal in increasing a person's level of intellect.

Personally, I adore reading. Some of my personal favourites are Little Women by Louisa May Alcott, Pride and Prejudice by Jane Austen, the seven Harry Potter books by J.K Rowling, The Hunger Games by Suzanne Collins, The Fault In Our Stars by John Green and... the list goes on!

Regardless of your age, you SHOULD read and once you find the right book: you'll enter an entirely different world, one which you won't want to leave. 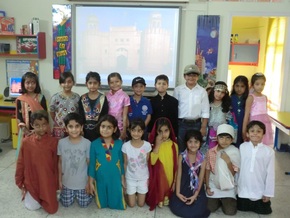 Class 2L put up a very interesting class presentation on Pakistan. Their parents also attended to see what the students had come up with and enjoyed immensely. 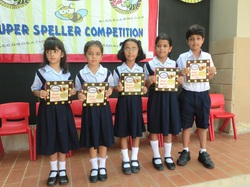 This was the second year when the LINKS Spelling Bee contest was held. The Spelling Bee lasted for three weeks.  Spelling contests took place each Monday and the names of the winners of each week were then displayed on a board near the entrance of the school building. The final spell off was held at the end of the three weeks.  Finalists were chosen on the basis of most number of times they were the winners in their classes.

The spelling lists were more difficult than the ones given last year and we all felt challenged and tried hard. Winners of each week were announced in the Friday assembly and were given certificates. When the spell-off day was approaching the finalists were getting more nervous and were often seen picking up books and learning difficult words.

On the day of the final Spelling Bee contest each class hoped for their class finalist to win and they all sat there cheering for their peers. The spell-off consisted of two rounds.

It was a fun time for the entire school and we all learned a lot of spellings of new words too!. 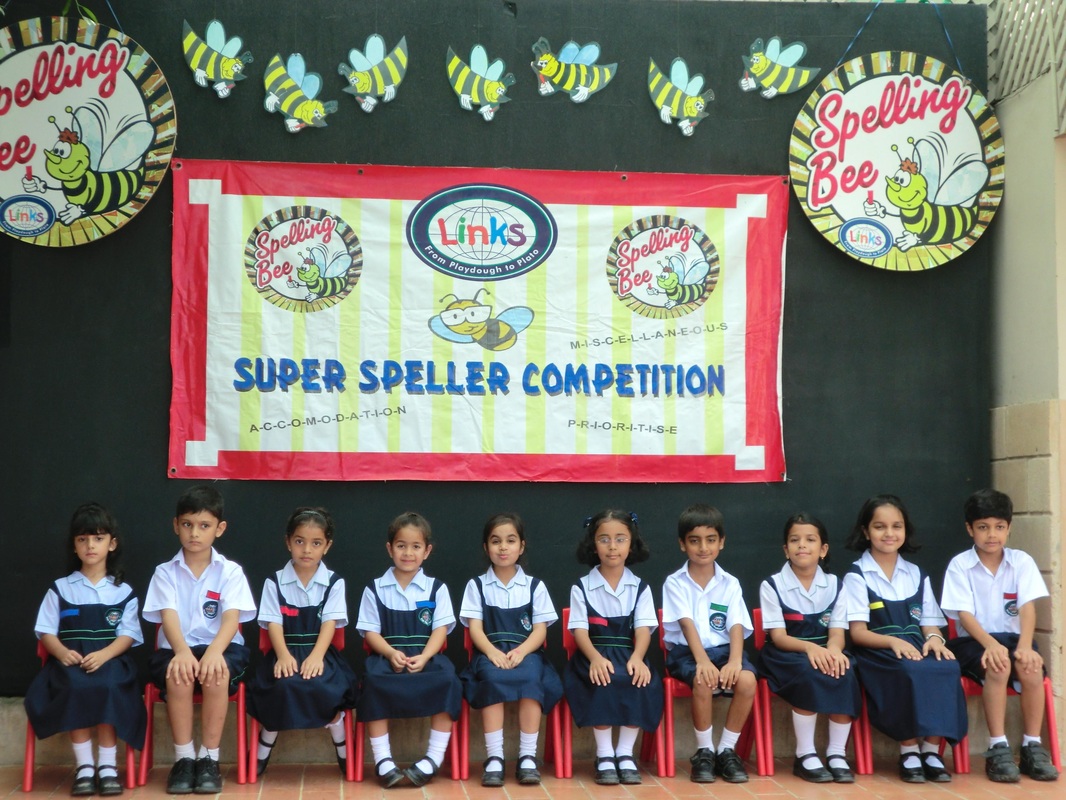 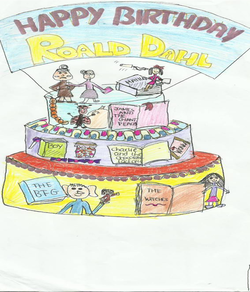 Roald Dahl Day was celebrated on the 13th of September, 2013, in honour of the writer’s birthday. Our school’s Library was decorated with diorama models and posters about Roald Dahl and his books, all of which were made by the students. Our Librarian, Miss Zareen, had prepared three games for us.

The first game was about finding a rubber mouse which was hidden amidst a jar of candies. This was to be done without actually opening the jar.  It signified the prank that Roald Dahl played on his local 'sweet shop' owner as a young boy.  The second game was to guess the number of candies in a jar and whoever guessed the right number would win the entire contents. The third game was for students to compare their foot size against BFG (one of Dahl’s characters). Whichever student would have the biggest shoe size in his or her class would be declared the winner.

Ms. Zareen had all classes from Grade 5 to 8 create a diorama of our favourite Roald Dahl book.  All the  masterpieces were displayed for parents and students to enjoy in both the Library and the front reception area  All students participating showed tremendous effort and creativity.

There was also a drawing competition in which students had to draw a cake for Mr.Dahl’s birthday and besides that, Miss Zareen held fun quizzes in class and told us many fun facts about this children’s book author who has written so many interesting and original books for children across the world to enjoy! 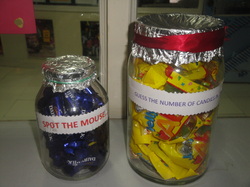 'Guess the number of candies in the jar'  and 'Spot the mouse'. Although no student was able to guess the correct number in the jar, which were 27 in total, Ms Zareen decided to split the contents of the jar among the students with the closest number of 26 & 27 respectively. 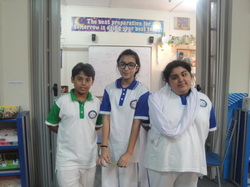 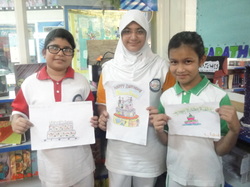 Winners from the 'Illustrate your own Roald Dahl Birthday cake", Manaal Asim 6L, Fizza Vazir 7P and Fahal Dossa 6L.  Fizza's 1st prize creation is featured at the top of our article. 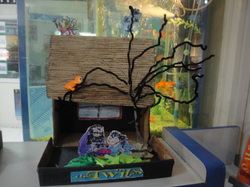 The Twits
By Zayna Mannan, 6 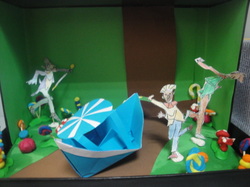 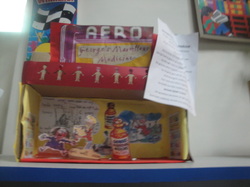 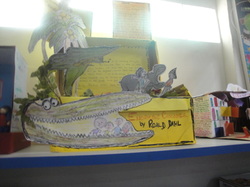 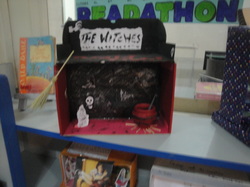 The Witches
by Washain Kalat, 8P 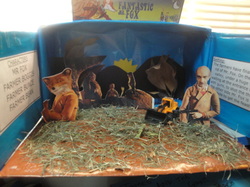 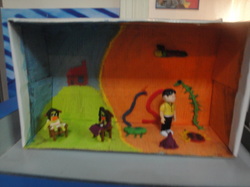 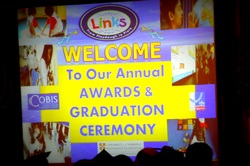 The Annual Awards Ceremony took place on the 13th of September, 2013, at the prestigious Royal Rodale Club, Karachi. The ceremony commenced at 5:00 p.m.   Students were asked to arrive earlier to review necessary rules.

Students assembled at a spot being guided by teachers to sit at designated places. It was a moment of great excitement for all the students and everyone present on this special occasion.

The ceremony started with an enthralling choir, performed by the very talented Links School troupe. The Chief Guest was the Honourable Consular General of the British High Commission, Mr. John Anthony Tucknott, who was present to distribute awards to position holders and MMUN participants.

A new type of award has been introduced this year, the Principle Award, which was awarded to extraordinary students of the school. The ceremony concluded with a choir; whereby, the graduates flipped their hats in the air. Due to low headroom, the hats did not rise and bounced back from the ceiling! Our Class of 2012 will be missed by us because of their enthusiastic and helpful behaviour towards the school. We really appreciate the hardwork accomplished by students to achieve these awards and the dedication of our teachers and must thank the school management to arrange an occasion as special as this.


Our School Choir
by Ayra Khan and Ayesha, 5L

This article is about the school choir's perspective that sang at the Awards Ceremony. The school invited parents to the Royal Rodale Club, Karachi. The choir sang and performed on stage in front of an excited and jubilant crowd. The songs that we chose for the choir were  "Together, Together” from the movie, High School Musical and 'We’ll Be There For You' - the title song from Friends.  We danced and clapped simultaneously. Miss Jessica taught us how to dance and sing with the music and we all made an effort to do that. We were excited but a bit nervous too and thought that we were not doing so well but we did a good job in the end. Our nerves did not get the better of us.  The students were from the classes 5 and 6: From Grade 5 Ayra Khan, Ayesha Yousuf, Amna Amir, Saad Sajad, Sam Khakalia, Zehra Chawla, M. Dalal,  Ayla Abbasi, Emaan Brohi, Mahum Wahab, Bazil Shehzad, Shahmir Ameer, Ahmed Ashfaque.  Grade 6 included: Ayla Adnan, Malaika Jamal, Aryan Parwani, Fahal Dossa, Zayna Mannan, Usman Gabba, Manaal Asim and Miraal Hai.  We were proud of our achievement. 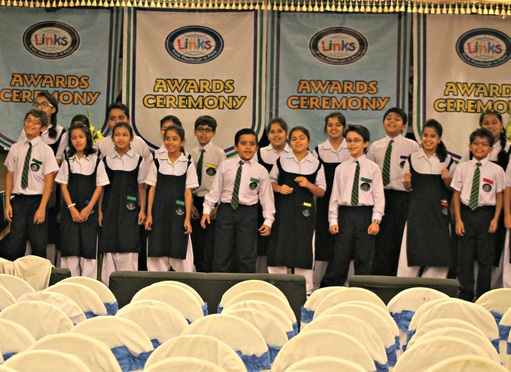 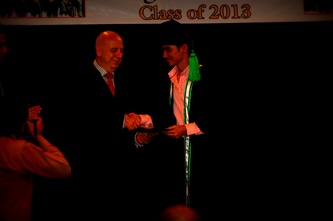 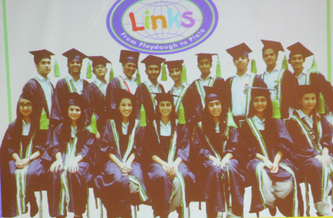 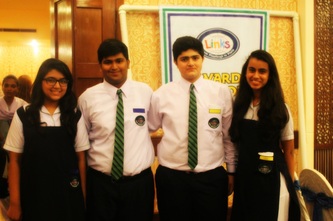